And there are a few stocks that have generated multibagger returns from 100% to 872%.

A couple hundred of them are trading more or less near the same levels they were trading at the start of this year.

Well, as the losses show, investing in penny stocks is not a bed of roses. The euphoria around penny stocks among rookie, retail investors in India is getting crazier day by day.

How often do you see a stock go up over 800% in a span of just 2 months! Or a stock that entirely wipes out your wealth during the same time frame?

If you’ve invested in penny stocks in 2022, you know by now that it’s a challenging mix. You’ve likely seen how volatile the stock market is.

If blue-chip stocks like HDFC and HDFC Bank too are falling, you know that it’s a warning sign and an indication that we’re in for a volatile ride ahead.

So, during volatile periods like the one we’re currently in, it’s important to be very selective when it comes to penny stocks. One must have penny stocks that regularly pay out dividends so that the downside is capped.

We’re not just saying this out of random assumptions. The numbers back the data.

After the bull market between 2014 and 2017, the next couple of years turned out to be brutal for mid and small caps, the segments where most of the penny stocks come from.

Strong gains of the bull market of 2014 to 2017 were being completely wiped out in this crash. It was stock market carnage at its worst.

During the 2018 period, penny stocks which had the highest median payouts of the past five years fared in similar lines as the BSE small cap index. A couple of them fell more but the numbers were higher for the stocks which fared in line with the smallcap index.

Some of them ended in the positive too. Indian Energy Exchange (IEX), Goldiam International, Firstsource Solutions, Generic Engineering, Birla Cable, and the likes, which were profitable and paid out regular dividends.

In the next 15 months too, when the smallcap index fell 34% between January 2019-March 2020, stocks which paid dividends and had a rock-solid balance sheets fared well. 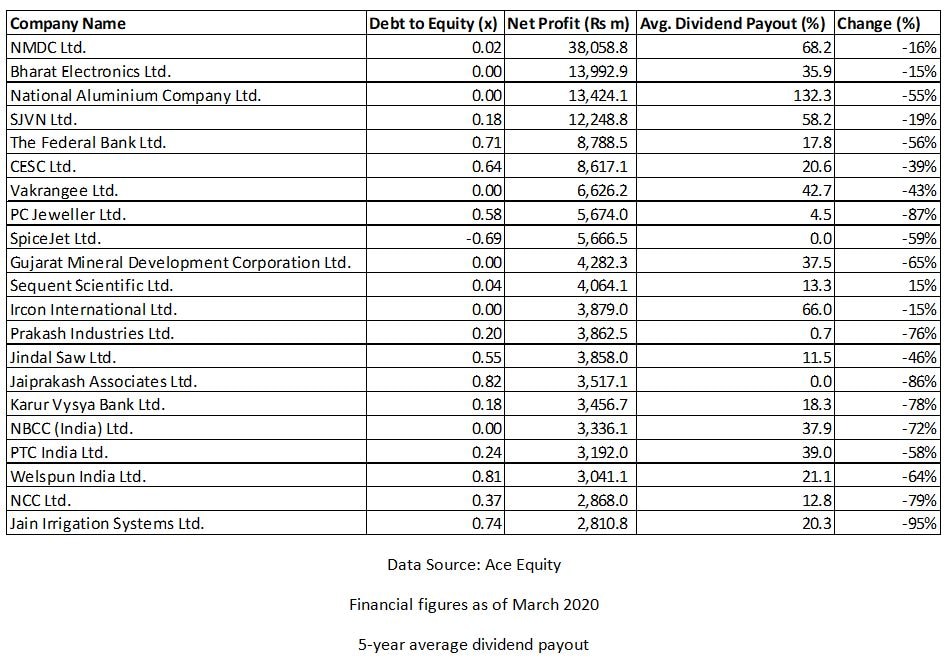 Of course, there were a few which fell more. Like PC Jeweller, Jaiprakash Associates, Jain Irrigation and the likes, which were already under scrutiny. And the late crash of March 2020 hammered even quality stocks.

The point we’re trying to make here is that it’s important to stick to penny stocks which pay dividends regularly, during volatile periods. They usually survive a crash better than other stocks.

Here’s a list of penny stocks which have been paying regular dividends, have reported profits for the past three years, and have a debt to equity ratio of less than 1. 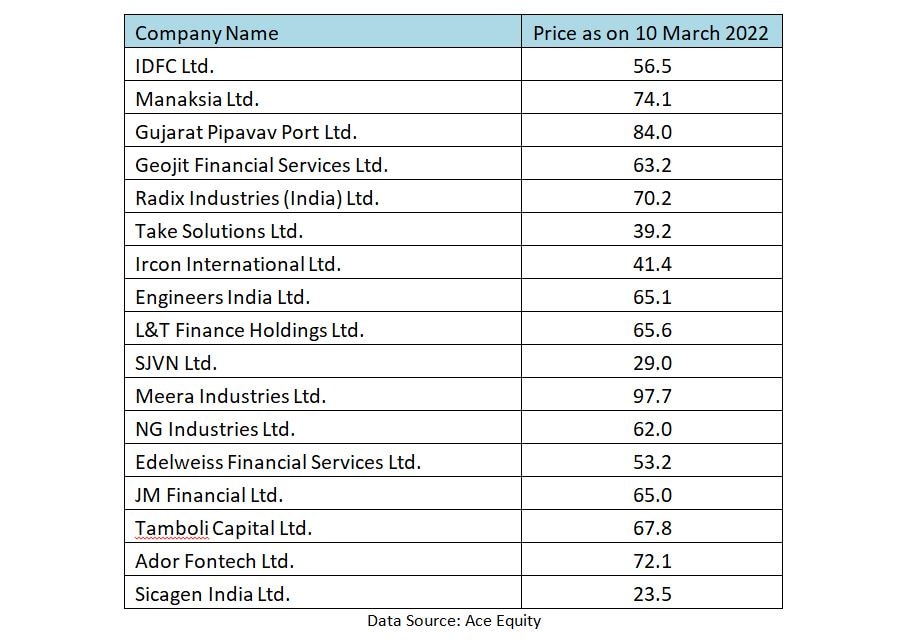 The stocks mentioned in the tables above are not recommendations.

What next after you’ve selected the best penny stocks to buy in 2022?

You can make the most of penny stocks by allocating your capital efficiently. That is, moving the allocation between penny stocks and fixed deposits.

As we’re dealing with penny stocks, it’s always important to keep some money off the table.

So, instead of parking your total capital in penny stocks at one go, allocate small equal parts periodically over an extended period.

Don’t make the mistake of loading up on penny stocks at any stage of the market price cycle.

For example, let’s say you have Rs 100. Start with allocating Rs 25 each to penny stocks and fixed deposits from the corpus of Rs 100. Keep at least 25% in both assets and never go 100% in either.

The beauty of this approach is that you are always in ‘crash protection’ mode as you are never 100% invested in penny stocks.

Investors who have money waiting on the sidelines can use the market correction as an opportunity to allocate more.

Don’t panic amid the volatility and stick to a process.

In penny stock investing, it’s very important to distinguish between penny stocks that are investment worthy and the ones that are highly speculative.

Brace yourselves for a bumpy ride ahead in 2022 as the inflation bells are still ringing and geopolitical tensions between Russia and Ukraine seem far from over.

With a clear strategy by your side, your journey can turn out to be relatively more comfortable.

Disclaimer: This article is for information purposes only. It is not a stock recommendation and should not be treated as such.

This article is syndicated from Equitymaster.com

(This story has not been edited by NDTV staff and is auto-generated from a syndicated feed.)

HDFC Bank Stock May Surge 43% in a Year; Investors Must Know What Experts Suggest