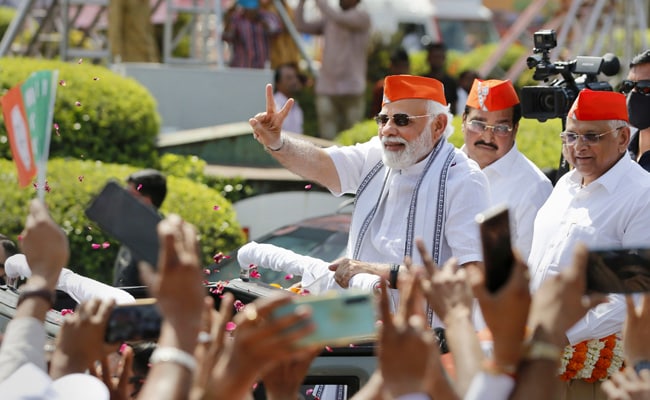 Prime Minister Narendra Modi, 71, decided to savour the victory in four of five states by launching the BJP’s election campaign in Gujarat. Modi is on a two-day visit to his home turf which will vote towards the end of  this year.

Like Modi or dislike him, there is a lot to be said for his indefatigable electoral appetite, the 24×7 campaign mode, and the effort that goes into constantly reminding voters that Brand Modi is the one-stop solution for all voters.

The normal ingredients of the Modi election blitzkrieg were in place in Gujarat – a road show with a sea of humanity, a Modi master class for His party’s legislators at the BJP office, and a home visit with his mother.

BJP sources told me that from now till December, Modi will be in Gujarat every fortnight, launching new schemes and holding meetings with legislators (in Gujarat, the final call on a tickets for legislators is still taken by Modi who knows the background of every single applicant).

All BJP legislators have been asked to prepare report cards on their constituency outreach and the number of central projects they implemented in their areas. Gujarat has an assembly of 182 seats and currently, the BJP has 112 of those.

Dharmendra Pradhan, Education Minister, who won laurels as the campaign in-charge of Uttar Pradesh, is likely to be tasked with the BJP’s Gujarat election campaign-in-charge. Coming up: new appointments to various boards and other state offices.

After winning Punjab,  Arvind Kejriwal’s Aam Aadmi Party is all set to contest the Gujarat assembly elections in a big way making it a three-cornered fight with an anaemic Congress also in the fray. The BJP claims this is no wrinkle in its plans, saying that Gujarat is firmly Modi-and-Shah country and no other party has a chance. Gujarat has voted for the BJP for 22 years in a row.

It is incontestable that the cult of Modi is thriving in his home state. Several Gujarat leaders I spoke to resented the conflation of Modi with Yogi Adityanath, now on track to be UP’s second-term Chief Ministers. Gujarat BJP,leaders say that only Modi wins elections for the party across India; and Adityanath has just earned a second term versus the four that Modi served in Gujarat before moving to Delhi.

The Gujarat election will also see Amit Shah in his full element. More than any polling agency, Shah has the caste composition, profile and recent developments of every single constituency in Gujarat available on his phone, according to sources close to him. The BJP will follow the Shah system of booth management of appointing two pramukhs (in-charges) of every booth in a constituency. The BJP in UP ensured that senior citizens made it to a polling booth to caste their vote. It was the only party to do so in UP to this extent, and the same practise will be followed in Gujarat said a senior leader.

Modi and Shah want to run a campaign of “shock and awe” in Gujarat to ensure that new entrant AAP recognised it had no chance in their stomping ground. The Congress, as is the case across the country, is a divided house in Gujarat.

While Hardik Patel, the Patidar or Patel leader, has been made the state chief, older Congress leaders don’t want to work with him. In the 2017 Gujarat election, Rahul Gandhi, then the Congress President, had shown a brief glimmer of actual strategy in taking on the BJP: he drafted Hardik Patel, then running the Patidar campaign for job reservations, Alpesh Thakor, a Koli community leader who had formed Gujarat Koli Thakor Sena, and Jignesh Mewani, a lawyer-activist. Thakor, after winning as a Congress candidate,  joined the BJP in 2019.

After the general election two years later, Gandhi quit as Congress President and typically, appeared to lose interest in Gujarat. Today, Modi and Shah have deployed the Gujarat campaign; the Congress continues to be the laggard in contrast to the BJP’s always-on campaign.

The BJP sacked Vijay Rupani as Chief Minister in September last after Modi expressed dissatisfaction with his handling of the pandemic and replaced him with Bhupendrabhai Patel, a first-time MLA and a Patidar leader. Both Rupani and Patel were present at the Modi roadshow.

It is not as if the BJP does not have obvious weaknesses that the Opposition can exploit. Look to AAP for this, the Congress is in ‘Do Not Disturb’ mode – even as the election has, for all practical purposes, begun.

(Swati Chaturvedi is an author and a journalist who has worked with The Indian Express, The Statesman and The Hindustan Times.)

Disclaimer: These are the personal opinions of the author.