In Time For Makar Sankranti 2022, Yami Gautam Stylishly Layers Her Blue Kurta With A White Turtleneck 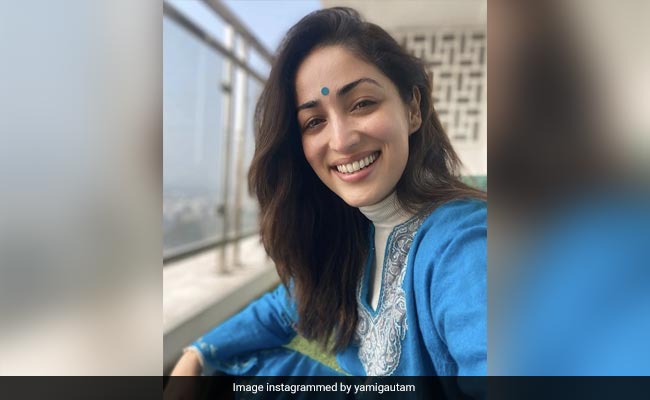 We don’t mind the January blues if that makes us look as pretty as Yami Gautam in her blue winter ensemble. The actress is turbocharged with her winter gear and she isn’t missing out on vibrance. Yami recently nailed an ethnic look. She wore a bright blue kurta, which showed intricate thread work along the neckline in white and grey hues. The edges of the long sleeves and the lower hemline of the kurta also featured similar thread work. Underneath, Yami wore a white ribbed turtleneck sweater. She paired it with black pants. The actress ditched makeup and jewellery but added an interesting detail to her look. She wore a large blue bindi on her forehead that matched the colour of her kurta.

Yami Gautam’s ethnic-wear game is strong and graceful. She appeared in a bright, navy blue kurta during Diwali. The kurta featured a golden block-print design all over, which added elegance to the simple crew neckline and long sleeves. Yami wore red bangles and golden dangler earrings. She tied her hair behind her and amped up her look with bright red lip colour.

(Also Read: In A Striking Saree Or A Flouncy Dress, Red Is Totally Yami Gautam’s Colour)

Karva Chauth saw Yami Gautam in a stylish ethnic ensemble. She chose a red silk saree with golden design. She paired the six-yards with a solid red blouse with golden borders on the sleeves. The actress wore sleek golden dangler earrings with the drape. She wore a red bindi and a blotch of sindoor. Her Bulgari mangalsutra became a statement-making accessory.

Yami Gautam knows her way through ethnic fashion. Once, she chose a grey salwar suit that featured colourful thread work along the neckline and midriff region. She added a splash of colour to it with a pink dupatta that had golden geometric designs.

Yami Gautam chose a more glamorous look in a bandh gala salwar suit of muted colours. The kurta displayed all-over white boti work and zardozi neckline. The ensemble stood out because of the light green dupatta with regal floral prints and zari detail along the edges. The actress styled herself in smoky eyes and big jhumkas.

If you are looking for ethnic fashion inspiration, Yami Gautam’s fashion diaries are the solution.