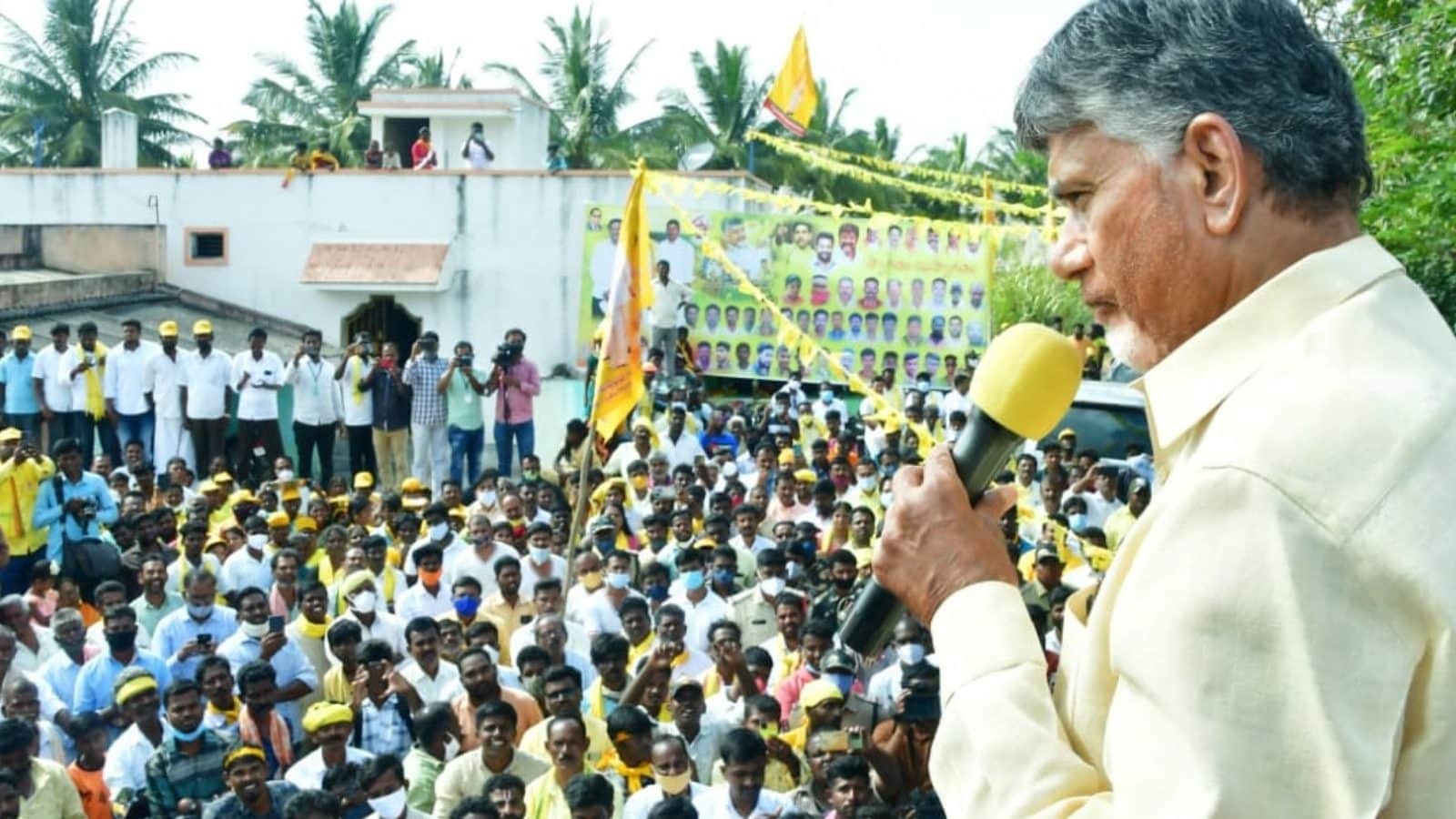 TDP national president and former chief minister N Chandrababu Naidu on Friday advised the poor beneficiaries of housing schemes not to accept the OTS registrations by the YSRCP government with photos of Jaganmohan Reddy on the ownership documents.

Naidu said any property registration would be valid on the nationally accepted stamp duty paper. The ongoing AP government’s OTS registrations with photos of the chief minister would be invalid and would not be accepted in any official transaction in future, he alleged.

On the second day of Naidu’s three-day visit to the Kuppam assembly constituency in Chittoor district, he addressed the local people at Guttupalli, Noolakunta, N Kothapalli and other places. He also gave mics to the elderly, farmers, women, and students, asking them to list their problems.

In his speeches, the TDP chief told the poorer sections not to be afraid of the threats from the ruling YSRCP miscreants. “If the gram volunteers threatened to cut the benefits, the low-income families should strongly fight back. Nobody should pay OTS charges. The TDP will give free registrations and come to power in two years. The TDP will cut the pensions in the families of volunteers if they harmed the poor beneficiaries,” he said.

Naidu said CM Jaganmohan Reddy made many promises before the polls but started making arbitrary decisions like the OTS registrations for houses constructed decades back under the TDP and other regimes. Naidu termed the cancellation of Anna Canteens, Sankranthi Kanuka, Ramzan Thofa, Christmas gift, and Videsi Vidya as “thoughtless decisions” by Naidu.

Naidu asked the people whether it was a mindless decision to destroy Rs 2 Lakh crore worth of assets of Amaravati city. “The TDP developed Cyberabad and Outer Ring Road for the current Telangana capital Hyderabad. All successive chief ministers like YSR, Rosaiah, Kiran Kumar Reddy had only recognised the worth of these projects and continued them. But, Jagan Reddy would not learn from such examples,” he alleged.

He further asked whether Hyderabad would get much development and value now if the HighTech City and ORR projects were also destroyed along the lines of Amaravati. “Because of one chance given to one person, the whole state was getting destroyed with no hope of recovery. This was why the public was rising very high against the chaotic decisions of Jagan’s rule,” he said.

Naidu assured villagers at Daseganuru that he would completely revamp and refurbish the TDP. “It is only the TDP that is actively opposing the lawless YSRCP government. Which other party would agitate for the sake of the people’s wellbeing if not the TDP? The ordinary public should also join hands and fight back,” he said.

The TDP chief cautioned that if the AP people did not take it as their responsibility to confront the “atrocious” rule, they would face “disastrous” consequences later. “Today, the ruling party rowdies might encroach somebody else’s land. Slowly, they would target everybody’s property. Already, the goons were grabbing private houses, sites and lands,” he said.

He asserted “true welfare benefits” like Chandranna Beema and Pelli Kanuka were given only during their regime. “Sub plan were given to the BCs. Jagan Reddy spoke of Nadu Nedu and Amma Vodi but now there were no teachers and facilities in the schools. Essentials and petrol prices went up. Taxes were being collected even on garbage and toilets. They were going to change current slabs which would automatically lead to a hike in charges,” he said.