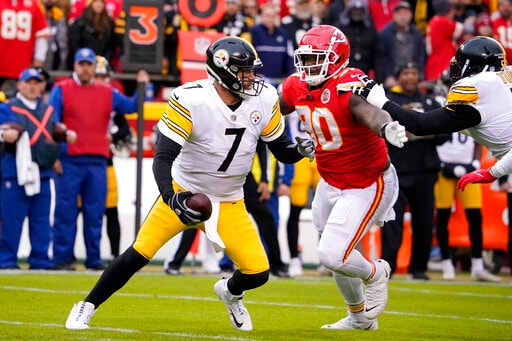 KANSAS CITY, Mo.: The last time the Chiefs played the Steelers in the playoffs, Tyreek Hill was a wide-eyed rookie wide receiver, Chris Jones was learning the ropes at defensive tackle and Travis Kelce was only just becoming one of the league’s best tight ends.

Oh, and Patrick Mahomes was still in college.

In retrospect, it wasn’t all that surprising the Chiefs lost on that cold January night in 2017, when Pittsburgh won 18-16 despite never reaching the end zone. Kansas City had won just one playoff game since 1994, and hadn’t won one at home in nearly three decades, while the Steelers rolled into town with a bunch of postseason experience.

Fast forward five years and the Chiefs are the ones with all the experience.

They’ve been to the last two Super Bowls. The last three AFC title games. And that team that couldn’t win a playoff game at home has won five straight, a franchise record it hopes to extend when the Chiefs play Pittsburgh again Sunday night.

“To be able to know the speed of the game and share it with (young players), I think, is important, Chiefs coach Andy Reid admitted. You dont know until you get there, but for whatever reason, each level you go up in the playoffs, the speed of the game picks up. And its all single elimination, so the urgency level goes up, too.

The Chiefs still have six players on their roster that played against the Steelers five years ago, which is quite astonishing in a league where the turnover rate is so high; the Steelers only have three of them, and only two that played.

Kelce had perhaps the most memorable day, catching five passes for 77 yards. Hill had four catches for 27 yards.

On the other side, Ben Roethlisberger threw for 224 yards with an interception. The same Antonio Brown that just caused such a ruckus for Tampa Bay caught six of his passes for 108 yards. And running back Le’Veon Bell, who two years later was part of the Super Bowl champions in Kansas City, ran roughshod for 170 yards on 30 carries.

The star was Chris Boswell, though. He hit each of his six field goal tries for all of the Steelers’ scoring.

Boswell is one of those still on the team in Pittsburgh. So is defensive lineman Cameron Heyward and Big Ben, who will be making his 23rd postseason start, tied with Joe Montana for fourth among quarterbacks in NFL history.

There’s much more on the line in this matchup.

I mean, it’s like I try to tell some of the young guys, every mistake is magnified, Roethlisberger said of the postseason experience. Even a third-down drop can be magnified, because the other team you’re playing is a really good football team, too. And so they capitalize on your mistake. I’ve been in a lot of these games where the team that makes the fewest mistakes is going to win. I just try to tell those guys, listen, go out there and play free and have fun and play football.

While the Chiefs have had nothing but postseason success lately, that hasn’t been the case in Pittsburgh. What experience the Steelers have had is mostly the losing variety: the divisional round to Jacksonville, the wild-card round to Cleveland.

There aren’t a whole lot of those in Kansas City.

All four players that carried the ball in last year’s Super Bowl will play Sunday. Seven of the eight players that caught a pass against Tampa Bay will be on the field. Tyrann Mathieu and most of the stars of the defense will be there, too.

The one thing that’s good about it, Reid acknowledged, is the veteran guys that have been through it with us can tell the young guys. Because we do have quite a few young kids that are playing right now, and all of a sudden they’re into Game 18 here and going, Holy, Toledo! We thought we had a long season at 12 in college football.’

Everything is a little faster in the playoffs and more aggressive, Reid added. Its just the nature of this thing and how it works, so weve got to make sure we get ourselves right and go through that process.

Notes: RB Clyde Edwards-Helaire (shoulder), Hill (calf) and RB Darrel Williams (toe) all practiced Wednesday. … The Chiefs activated rookie DE Josh Kaindoh from injured reserve, giving them 53 on the active roster. He went on IR on Oct. 5 with an ankle injury. He was designated to return to practice Dec. 22.